A “Feminist War” that Subjugates Women:
the Western Invasion of Afghanistan 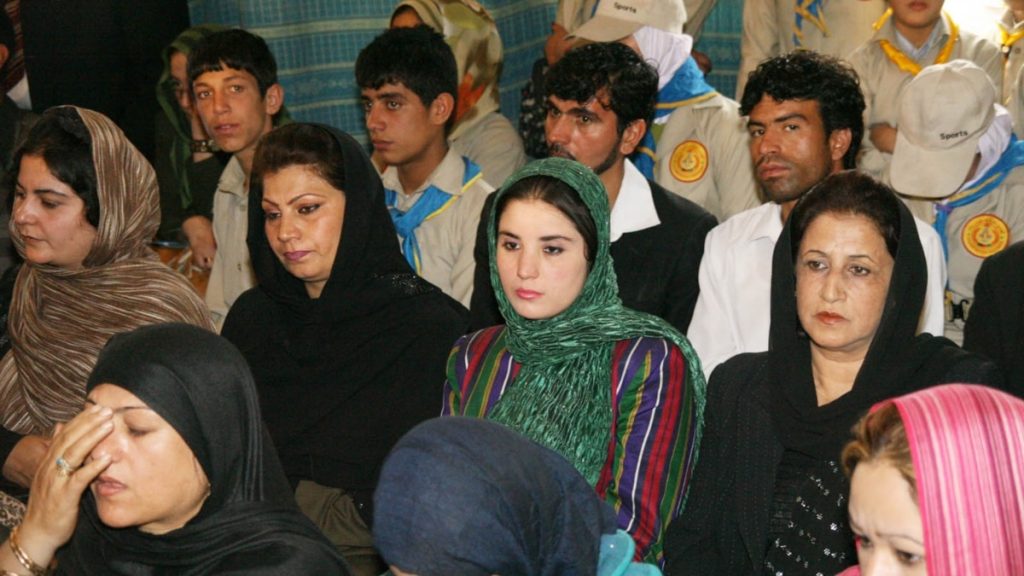 The world has witnessed foreign military interventions, namely by the West, in the name of human rights. As the US prepared to militarily invade Afghanistan following 9/11, new logics emerged in American political discourse around Afghan women’s rights. On the one hand, we observed the discourse around the fight of terrorism, as defined by the Bush administration (Wintour et al., 2001); on the other, it became a fight for women’s rights and social engineering, as claimed by First Lady Laura Bush (U.S. Government, 2001). This essay will focus on the colonial (mis)representations of Afghan and third world women perpetrated through the white Feminist narrative during the Western invasion of Afghanistan.

The new emerging language indicates that the use of force by white men is the only means of “saving brown women from brown men” (Spivak, 1999:284). Paradoxically, humanitarian intervention – rooted in ethics of benevolence – becomes a paradigm where inhumane colonial rule coexists with western humanitarian principles, seen as morally superior, natural, inevitable, and dictating the sole epistemology that must determine world order. Military intervention becomes a form of imperialism that perpetuates pathological colonial binaries clearly setting apart Western women from those belonging to the third world, who are dehistoricized, homogenized and see their political subjectivity erased, becoming objects of passivity subjected to violent knowledge structures. This propagates white supremacy and white saviourism, grounded on historic amnesia that wipes out western violence, failing to recognise Afghan women’s diversity and agency. Ultimately, the neo-colonial overlooking of local knowledge networks when formulating strategies for nation-building demonstrates and perpetuate the failure of external agents to comprehend Afghanistan.

Postcolonial feminism centres particularly on the way in which third-world women are represented in Western narratives (Ayotte and Hussain, 2005). In 2001, to legitimize the US invasion of Afghanistan and offer a convenient rationale for colonial rule, First Lady Laura Bush declared “Because of our recent military gains in much of Afghanistan, women are no longer imprisoned in their homes (…) The fight against terrorism is also a fight for the rights and dignity of women” (U.S. Government, 2001). This white saviour discourse is loaded with orientalist civilising logics, similar to when Lord Cromer censured Islam’s treatment of women during the British colonisation of Egypt (Ghorbani, 2012). This rationale not only assumes white feminism is the only route to empowerment, but that violence is the only mechanism that may liberate Muslim women from oppressors and the western world from terrorism.

Tickner (2001:57) argues foreign military intervention is legitimized through the notion of “the protected”, implying it requires a specific definition of the object of security. Moghissi (1999:4) states women’s rights have frequently been “used ideologically to isolate and contain adversaries of great powers”. Creating a visual palette that homogenises third-world women whilst glorifying American “just warrior[s]” that combat a “malignant, often racialized masculinity” affirms the subjectivity of western white male saviours and instrumentalizes the repression of brown Afghans (Tickner, 2001:57). This binary thinking becomes a generator of epistemic violence that denies third-world women agency, erases them as international relations subjects and propagates violent knowledge about their political muscle, structuring networks of thought regarding the brown female gender. Afghan women are not only neglected, but their existence as individual subjects denied; the freedoms they must envision must replicate western norms if they are to enter modernity and its open-mindedness.

The obsession with saving desperate Afghan women did not only occur when “war on terror” was launched, but again when the Taliban took over in August 2021 (Monakhov, 2003; Jake, 2021). However, framing the Taliban as the sole oppressor “prevent[s] the serious exploration of the roots and nature of human suffering in this part of the world” (Aby-Lughod, 2002:784). Overlooking the fact that Bin Laden and the Taliban emerged from the US-supported Mujahadeen ensures American complicity in the creation and maintenance of sexist structures is wiped out of history. Violence becomes a phenomenon perpetrated by Muslim demons, whilst heroic white feminists pursue their (immoral) rescuing and civilizing missions. Simultaneously, the erasure of women’s history is verified, failing to acknowledge their identities, the various patriarchal structures in which they have been inserted and their culture outside of and beyond the Taliban rule.

Historical amnesia translates into a form of violence that does not allow individuals to fully understand tragedies and their multidimensionality. During the US occupation in 2013, Halima was shot dead by her father in front of 300 people for “dishonouring her family” (Amnesty International, 2013). Later, in 2015, Farkhunda was beaten, thrown down a roof, ran over by a car and burned alive by a mob (Rubin, 2015). These tragedies challenged the colonial binary oppositions of the civilized global north vs. the barbarous peoples from the south in need of being civilized. Is further tragedy the only way to make the divide and destruction caused by colonialism evident to all?

Whilst Lady Bush characterized the West as the liberator of Afghan women from Taliban oppression (U.S. Government, 2001), Farkhunda’s killers were ordinary individuals including policemen and a young boy raised in a US—occupied Afghanistan with a liberal ideology towards women’s rights (Rubin, 2015). The subjugation of women to violent punishments was not ended by the US military and established American legal systems were incapable of bringing Farkhunda’s aggressors to justice. In Halima’s case, occupiers were unable to reform informal justice systems. Instead, the structural colonial violence verified during occupation might have posed a significant limitation to Afghan women’s true emancipation. Although women began working for the government, how could their rights represent self-determination if reliant on American power?

Afghan women were raped and assaulted by US soldiers and the CIA, but the international community kept silent (Peace Women, 2011; Gossman, 2014). This demonstrates the selectivity of Western media when choosing which voices are to be heard and the clear priority of imperialism over a feminism aimed at eliminating gender violence. The US performed some of the abusive practices it condemned the Taliban for and the USSR during the 1980s (Gossman, 2014). The rationale that an empire rooted in torture and sexual violence may end this violence abroad is illogic; instead, American militarism must be held accountable. At the same time, a more robust and coherent feminist politics is required, freezing the funding of leaders who encourage gender discrimination such as Saudi Arabia and Israel. If truly a believer of the feminist rhetoric, why not invade England for its low conviction rates for rape (Barr and Topping, 2021)?

Furthermore, consensus that the burqa symbolizes Afghan women’s oppression exists; images of women wearing the burqa became a tool for legitimizing violence in the name of salvation (Kensinger, 2003). Following 9/11 and the recent Taliban takeover, the media has been inundated with news showing women being subjected to violence for refusing to cover themselves and photos of veiled women that lack to explain the veil’s origins and its meaning across space and time (Janjua, 2019; Fahey, 2021). In fact, definitions of repression are socially constructed; covering has been employed as a symbol of resistance against Western colonialism, the desire to move freely in public, a manifestation of religious piety and the desire for privacy (Zeiger, 2008). It has also helped to smuggle books into underground schools and cameras to record Taliban abuses (Kensinger, 2003).

Erasing indigenous knowledge through Western representations makes invisible the heterogeneity and agency of third-world women and covering traditions, hindering the appreciation of divergences among women across the globe. Additionally, the veil metaphor connects Islamic extremism with women’s subjugation, irrespective of Western culpability in the creation of Islamic fundamentalism and challenges faced by women. This reinforces “moral, cultural and political deficiencies of the Islamic world”, demonizing the burqa, homogenising Islam, strengthening hostility towards it and legitimizing killing for a western (civilized and liberal) regime (Moghissi, 1999:37).

Western media channels celebrated Afghan women’s liberation through photographs of unveiled faces (Monakhov, 2003); a clear fetishization of the unveiling symbolises the end of the antithesis to western culture and encourages the exoticization of attire (Kensinger, 2003:15). This sexualises the exotic Orient, seen as mysterious and removed from public spheres and thus beyond the limits of control of Western colonizers. Equating freedom to unveiling depends on an Orientalist promise to discover female bodies through military intervention, perversely linking freedom with physical, structural and epistemic violence. Simultaneously, it attributes uncovering to male NATO fighters, conveying male paternalism and patriarchy.

The neo-colonialism present in Western discourse during its invasion of Afghanistan reveals the power of narrative in shaping our understanding of the world and existing gendered practices. The epistemic violence inflicted upon Afghan and third world women – who have lived against a hegemonic history – flattens their diversity, denies individual histories and erases their subjectivity, creating a unique role model of feminist histories: challenges confronted by white, heterosexual, elite women. Simultaneously, it creates several colonial dichotomies that ultimately suggest brown women must be saved from brown men by white men (Spivak, 1999:284).

To reconfigure normative notions on gender, indigenous knowledge on gender from the global south must be incorporated into a wider geopolitical epistemology of feminism. Only this way may Afghanistan be freed from debilitating neo-colonial agendas, opening up intellectual and dialogical space. To counter the myopic fixation on the burqa and on the Taliban as the sole roots of oppression, arguments must contextualise covering practices, highlighting they are not exclusive to Islam, Afghanistan, third world peoples and specific regimes. This will defy a solidarity based on ethno- and eurocentrism, elevate indigenous traditions and help Afghans recover their history.

A few questions emerge that must be considered in future research. How can we reconcile the competing claims that any form of colonialism is prejudicial, and that the West has failed Afghanistan? Does saving lives justify invasion that perpetuates colonial relationships, or can security never be achieved through violence, in which case, we (west) should never intervene in the first place? If so, does this inherently imply a human hierarchy that grants human rights to the deserving and fails the undeserving, or on the contrary, does it mean we recognise equal human rights and the failure of an intervention in upholding them? Are we not simply abandoning those we believe worthless or over which we believe we will be unable to extend our dominion and power?

Janjua, H., 2019. ‘I lost consciousness’: woman whipped by the Taliban over burqa without veil. [online] the Guardian. Available at: <https://www.theguardian.com/global-development/2019/apr/18/woman-whipped-by-the-taliban-over-burqa-without-veil-afghanistan> [Accessed 18 February 2022].