Around the World:
What's Going On in Nigeria?

This is a part of our series “Around the World”, where we analyse political, social and economic issues from countries often times set aside on the news. 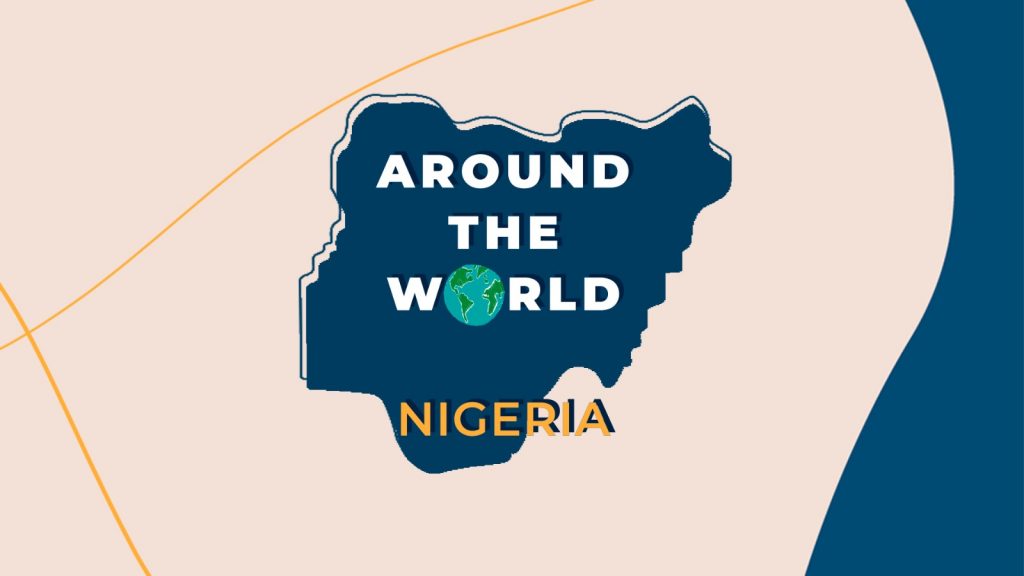 For more than 13 years, people in the north-eastern states of Nigeria, particularly Borno, Yobe and Adamawa, have endured through extreme violence and poverty, with violations of human rights and humanitarian law being largely reported. For years, Boko Haram has been attacking with no discernment, targeting schools and hospitals, killing civilians, raping and sequestering women and young girls, and recruiting children. On the other hand, security forces have been known for the excessive use of force and power, including torture, arbitrary arrests, unlawful killings and repression of human rights.

Adding to this, disputes over agricultural land between farmers and herders, criminal activity and the COVID-19 pandemic are also sources of brutality and living insecurity for the millions of people that live in the region. Many have crossed borders, with 304.000 people seeking refuge in Cameroon, Chad or Niger, but the majority stayed in the country. According to the International Organization for Migration (IOM), there are more than 2 million internally displaced people (IDPs) living in the temporary shelters that make up various overcrowded camps. This number increases fourfold when considering how many people are in serious need of assistance and protection.

Last year, the levels of severe hunger reached an all-time high, with on-site aid workers facing the possibility of having to cut rations after the rise of food prices and consequent decrease in supply. Moreover, Human Rights Watch reports that, since 2019, obtaining authorization to move humanitarian aid to the northeast of the country has become harder due to lengthy processes, leaving one of the world’s most severe humanitarian crisis without adequate support.

As mentioned, the habitants of northeast Nigeria face different factors that contribute to a situation of living instability and danger, forced displacement and poverty, with the primary cause being conflict, particularly involving Boko Haram and counterinsurgencies. In 2021, Boko Haram has diverged in two conflicting factions, Jama’atu Ahlis Sunna Lidda’awati wa-Jihad (JAS) and Islamic State West Africa Province (ISWAP), with the latter being formed by supporters of the group’s affiliation with the Islamic State. Boko Haram has since been surpassed by ISWAP as the deadliest terrorist group in Nigeria. However, both ISWAP and Boko Haram are increasing their activity in neighbouring countries, Camerron and Niger, the situation being especially worrying in the latter, where 84% of the casualties resulting from terrorist attacks are civilians.

What is Boko Haram?

Boko Haram is an organization of terrorist methods that claims to follow the Sunni Islamic traditions and can be characterized by its criticism and categorical objection to Western education and secularism.

The group emerged in the state of Borno, in 2001, from a relatively small movement that aspired to establish Sharia (Islamic Law) and to live according to hijra – that is, the emigration to Islamic lands to practice a pure Islam. The group is considered to be integrated in the Salafist movement (the biggest branch of Sunni Islam, with 85-90% of the world’s muslims), however its founder and leader, Moahmmed Yusuf, preached with such intolerance towards any transgression of what were his religious and political views, that he was heavily criticized by Salafi as well as Sufi and Christian clerics from the beginning of the group’s activity.

In 2009, Boko Haram’s history took an important turn. With the eruption of a conflict with the Nigerian security forces, hundreds of civilians were killed, as well as dozens of the group’s members and Yusuf, who died in police custody. Resurging in 2010 with a new leader, their violence escalated significantly and continued to do so over the last decade.

Historical context of the conflict

Reflecting on the early years of Boko Haram, the fact that the recruiting of members was largely based on Yusuf’s preaching of a doctrine that excluded “the vast majority of citizens, Muslims and nonMuslims alike” and proceeded to  advocate the killing of such individuals and entire groups on the basis that their practices were “ungodly”, observing the transformation of this once small movement into the deadliest terrorist group in the world in 2015, important questions arise. One in particular is: Why did Boko Haram’s doctrine resonate with so many locals of the northern states of Nigeria?

Attempting to answer this question implies taking into account multiple points of view, an important one being the historical background and subsequent socioeconomical context of the region.

What is now the territory of the Federal Republic of Nigeria was once occupied by multiple indigenous communities, each with ancient and rich cultures, organized with their own forms of government. After the arrival of the Portuguese navigators in the 16th century, these communities were faced with drastic changes.

The first followed the establishing of Port of Calabar into one of the most important epicentres of the Transatlantic Slave Trade. During this period, even though all territories and indigenous communities suffered the consequences of the slave trade (such as depopulation and neglect of agricultural development), the communities of the south acted predominantly as intermediaries in order to avoid becoming victims themselves, while benefiting from economical incentives. The second corresponds to the colonization of these different territories and their communities. With the British annexation of Lagos, and surrounding territories, and the Sokoto Caliphate in the north, two protectorates were united to form the Colony and Protectorate of Nigeria, the territory that we now know as Nigeria.

The amalgamation of such different territories and people had no consideration for the already existing cultural, linguistic and religious boundaries that had been established for centuries before the arrival of the first Portuguese expeditions. The colonization by the British included a new administrative system in the north – one of indirect policy, in which the traditional rulers of each community were maintained but administered policies and laws determined by the British officials, serving only as intermediaries between the British government and the population. It also included the dissemination of the English language, Christianity and an education parallel to the one in the western civilizations.

While in the south these were reasonably received, where they had already been introduced during the slave trade period, strong resistance was found in the north that, for more than 100 years, had been under Islamic rule.

When Nigeria was recognized full independence in 1961, its economy was already largely influenced by the production and export of fossil fuels. As the country became the largest oil producer in Africa over the rest of the 20th century, it would be expected that the country’s population would benefit from the economic growth that came with this title. Yet, in reality, it deepened the regional and social inequalities that lingered since the British occupation, since the restructuring of the economy and westernization of the big cities in the south could now only be seized by those that lived in more privileged areas during the period of colonization.

In conclusion, Nigeria’s history and the path of Boko Haram show how the lack of educational, cultural and economic opportunities tailored to each specific community can lead to the marginalization of some, leaving them more exposed to extremist ideology and susceptible to radicalization. Terrorism is one of the most important drivers of forced migration and, while the links between the two are complex, their impact can be quite straight-forward for the affected populations and can last for generations. The generating of more violence, psychological trauma, displacement, poverty and livelihood insecurity that are (more or less) reported to us every day, should mobilize us to uncover how they can be traced back to the pass and present of the places we, as Europeans, like to call home.