Ukraine-Russia:
How Are Countries Supporting Refugees? 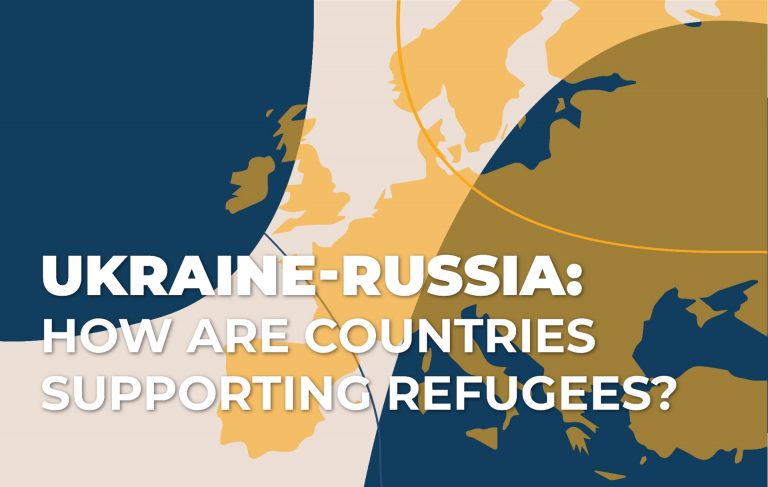 Since the beginning of the conflict, almost 6.5 million people are internally displaced, in addition to almost 3.9 million people who have left Ukraine and crossed into neighboring countries. Learn specific responses to this crisis by country:

However, concerns on Hungary´s true will to help those in danger has been questioned. The country has recently been accused of inflating the number of Ukrainians arriving, not differentiating those who are only transiting through and those who wish to stay. It is claimed that Hungary is exaggerating on these numbers in order to further seek EU funds. 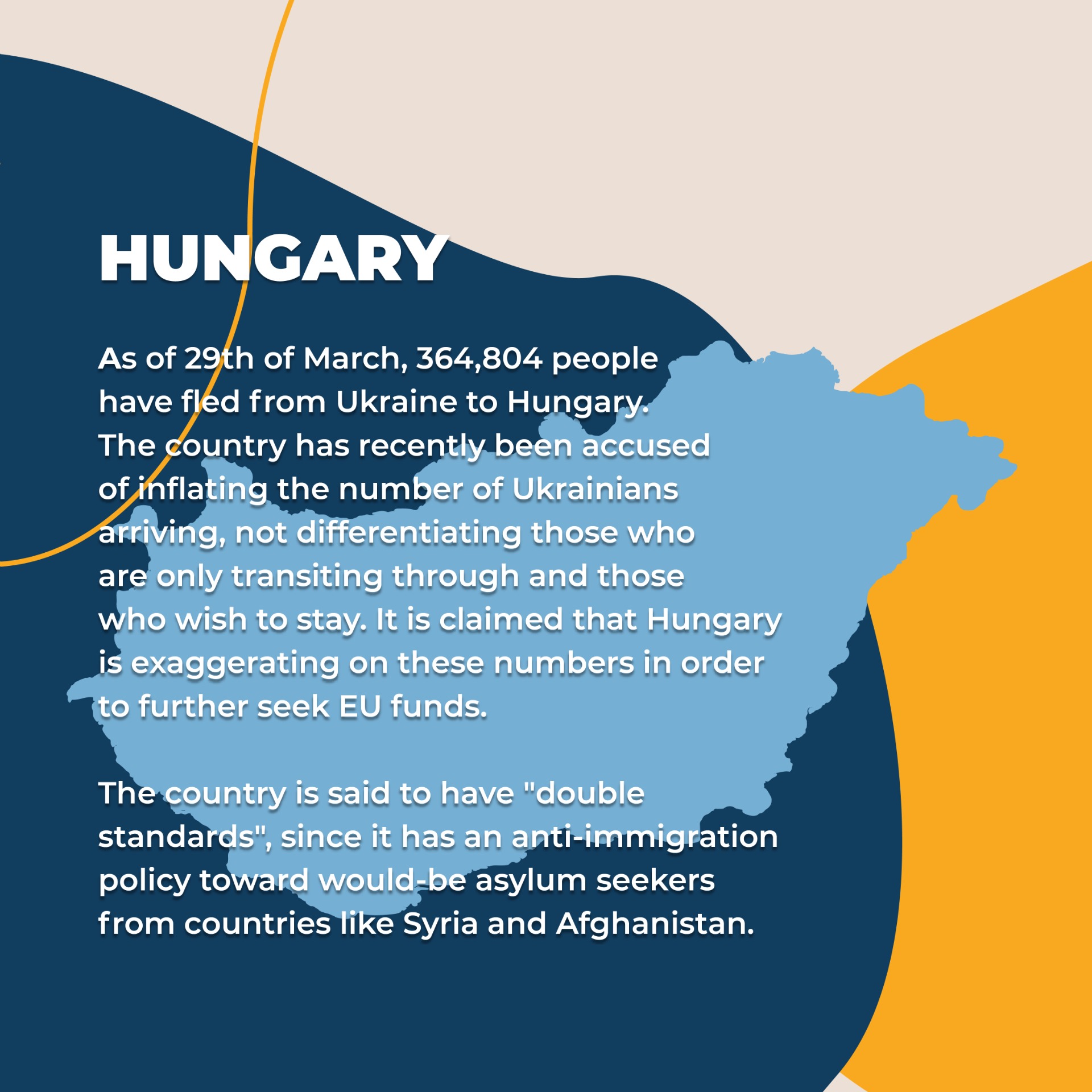 Moreover, the country’s hardline prime minister, Viktor Orbán, has been criticized by the EU and the United Nations Refugee agency for the government’s anti-immigration policy toward would-be asylum seekers from countries like Syria and Afghanistan. This raises further questions on the country´s double-standards and true welcoming of Ukrainian refugees. Nonetheless, the Hungarian population response has been heartwarming, especially considering that refugees haven’t received a lot of support in the past.

Ukraine’s neighbour maintains a military non-alignment over its fear of Russia, but requests to join the EU.

Moldova’s population has increased by almost 4 percent, as hundreds of thousands of Ukraine refugees have sought safety within its borders.Around 110,000  Ukrainians have stayed and found a warm welcome.

The country is making huge efforts to help their neighbours´ safety.

However, concerns regarding the energy and economic crisis are increasing as resources are quickly running out.

According to the UNHR, Romania is assisting Moldova in moving refugees to its territory. This is urgently required as Moldova has already seen a huge influx of refugees that may become too much considering the small country of Moldova and its limited resources.

According to the UN, as of the 29th of March 608,936 Ukrainian refugees have fled  to Romania.

The Uk is the largest bilateral humanitarian donor to Ukraine. The country has recently donated $100m to Ukraine´s economy.

As of the 4th of March, the UK has opened a Ukraine Family Scheme Visa allowing applicants to come to the country. Despite calling Ukrainians their “friends”, concerns regarding UK´s true will to welcome those fleeing from war remain as bureaucracies present a major obstacle to visa approvals. In fact, the charity Positive Action in Housing claims that visas have not being granted to the 583 Ukrainian families it supports, and that refugees seeking sponsors are putting themselves in danger. 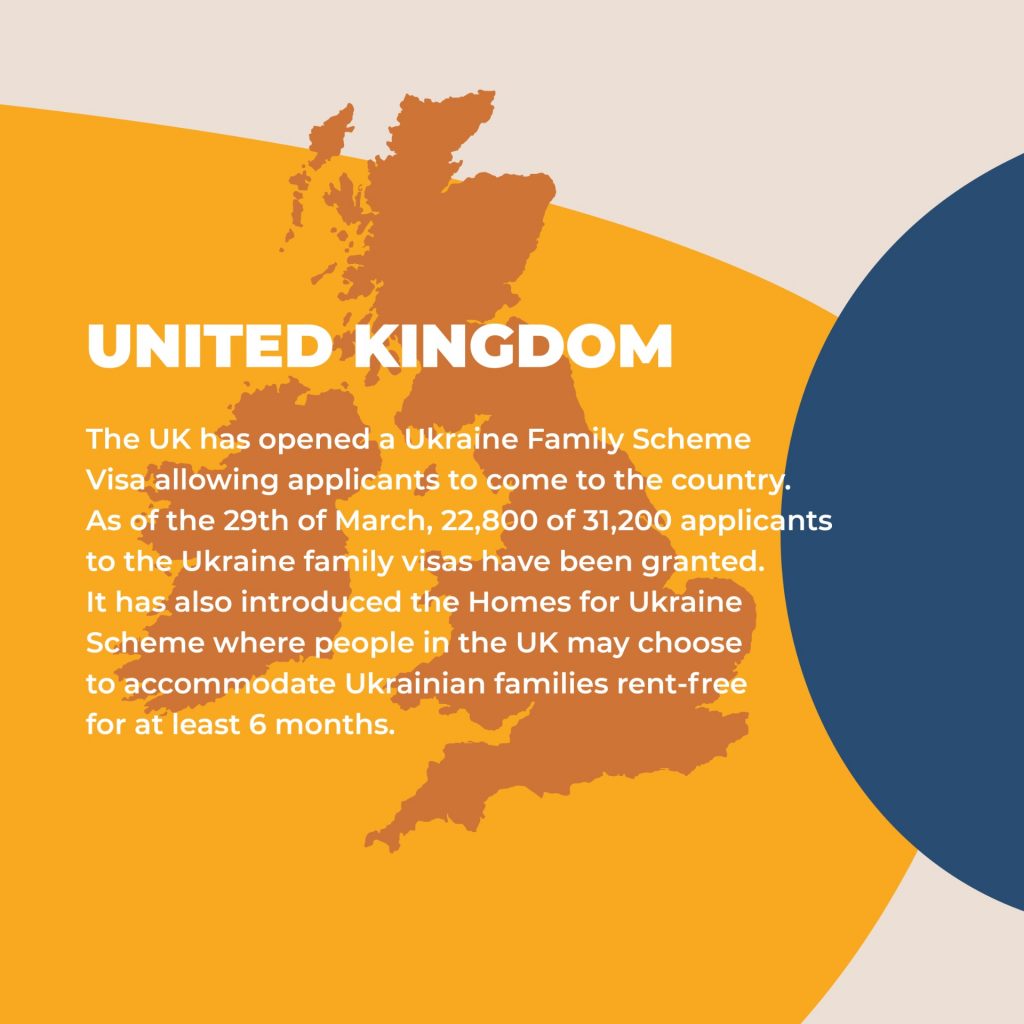 However, as of the 29th of March, 22,800 of 31,200 applicants to the Ukraine family visas have been granted. It has also introduced the Homes for Ukraine Scheme where people in the UK may choose to accommodate Ukrainian families rent-free for at least 6 months.

The UK Government’s is also targeting the Central Bank of the Russian Federation (CBR). The aim is to prevent the CBR from deploying its foreign reserves in ways that undermine the impact of sanctions already imposed and to undercut Russia´s ability to engage in foreign exchange transactions.

In the past three weeks, the country received more than 13,000 Ukrainian refugees after the government approved measures to speed up and simplify the entry process of those fleeing the war.

There are many organisations and associations collecting donations for Ukraine across the country. In fact, the stadium of Leiria is being converted to help house as many Ukrainians as possible.

The Institute of Employment and Vocational Training (IEFP) also mobilized a task force to coordinate skills matching between new Ukrainians arrivals on the one hand, and the needs of businesses in Portugal on the other. The tourism and hospitality sector in particular, is promoting vacant roles to be filled by newly-arrived Ukrainians.

According to Bloomberg, the favorable tax treatment for digital assets such as Bitcoin, makes Portugal an especially attractive refugee destination, providing opportunities for a new life. 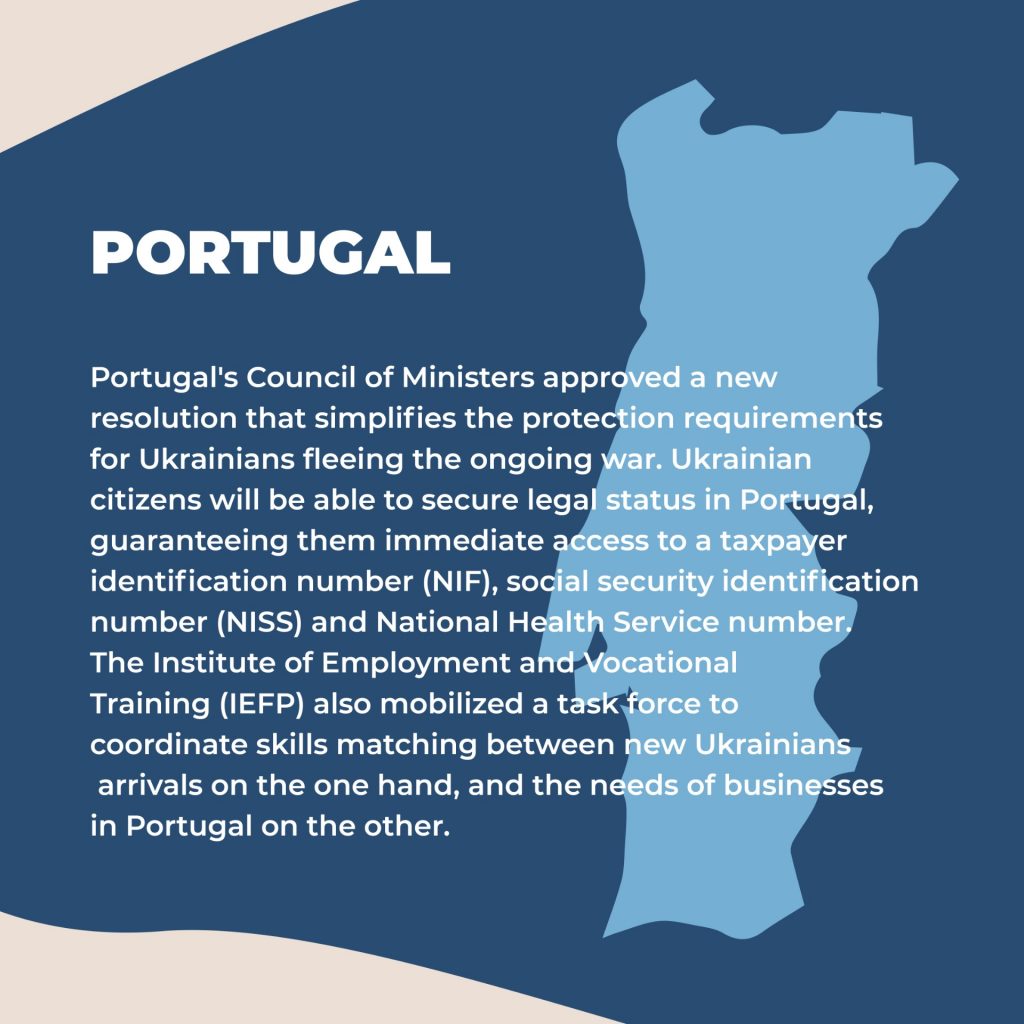 Poland is fast becoming the lynchpin of the Western effort to defend Ukraine.

Huge numbers of ordinary Poles are acting with astonishing generosity to more than 1.7 million Ukrainian refugees pouring across their eastern border. Poles are sending relief aid and opening their homes to thousands of people, whilst the tourism industry is working to provide temporary housing too.  There have also been rumours on seizing Russian diplomat´s properties and use it to accommodate Ukrainian refugees.

Poland has also announced £1.3bn fund for Ukrainian refugees.  However, with Poland´s recent refugee history as a backdrop, it comes as no surprise that there have been reports of double-standards when welcoming LGBTQ+ and black Ukrainian refugees.

Over the past month, Germany has been one of the first EU Member States participating in the reception of refugees who fled the war. The country has seen and accommodated the arrival of about 300,000 displaced Ukrainians

Although Germany was one of the last countries to sign on to the SWIFT sanction, it has taken a diplomatic U-turn. The country is currently under immense pressure to join the energy boycott on Russia’s gas pipeline.

The Ukraine refugee emergency provides Europe with not only an important opportunity to demonstrate its generosity, humanitarian values, and commitment to the global refugee protection regime; it is also a critical moment of reflection: Can the people of Europe overcome their widespread racism and animosity and embrace the universalist spirit of the 1951 Refugee Convention? Are we going to finally realise the catastrophic double-standard nature of border imposing?