Discourse in the reporting of the Russian-Ukraine conflict 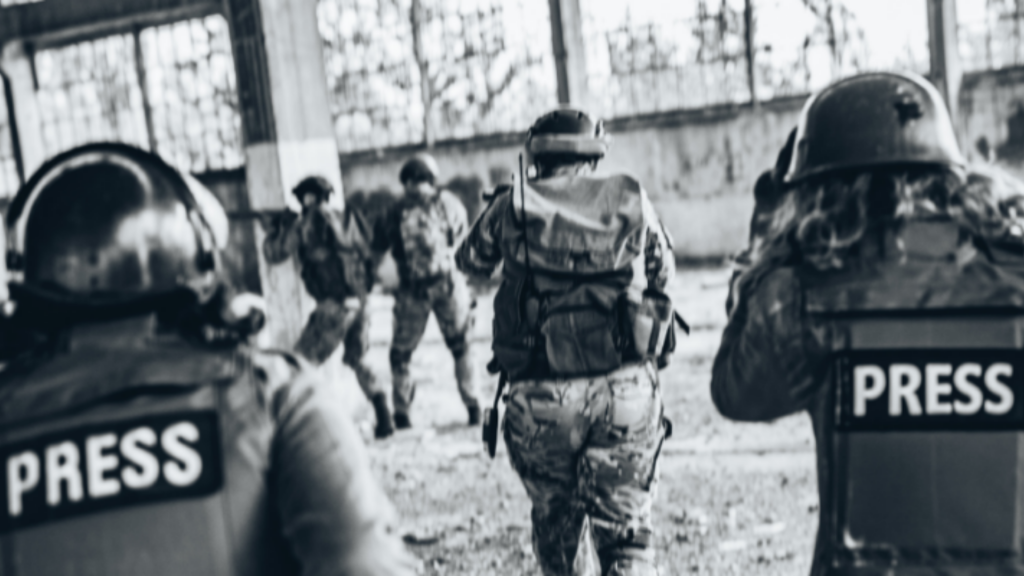 By the end of February, war broke out in Europe. It is something that we haven’t felt in more than a decade – a heavily destructive, physical conflict, that put aside the (diplomatically made-up) cold peace in which Russia and the western world lived in since the 1990s. All of this, of course, because of Russia’s re-invasion of Ukraine.

According to the UNHCR’s operational data portal, as of March 31st 2022, more than 4 million Ukrainians have fled the country, and the Internal Displacement Monitoring Centre mentions that around 6.5 million people have relocated inside Ukraine, from East to West, and looking for safety from Kyiv to Lviv. The United Nations Development Programme estimates that 90% of the Ukrainian population could face extreme poverty. The UNHCR also tells us that 13 million people are estimated to be stranded in affected areas or unable to leave.

As we know, this is far from being the first, only (and definitely is not going to be the last) humanitarian crisis that Europe has to responsibly deal with. The difference from previous ones lies in the way that we have been responding to these different crisis, which includes all from political figures, chief information officers, big media outlets, to commentators in news channels or the simplest figure of them all – people we interact with, daily, in our normal lives.

What has been the media’s role in the diffusion of information regarding war? How does it impact the way we act when we have to take action on it? We will analyse how Western media has portrayed local conflicts and how it has impacted political measures and actions of solidarity, whether it’s in Ukraine, or in Yemen (remember? where hunger kills more than anywhere else in the world), in Afghanistan (where war stopped being physical and human rights stopped being a guarantee), in the Persian Gulf (especially Iraq, in between civil war and revolutions for almost twenty years), in Syria (forgotten by the time), in Palestine (where peace was never an option)… the list is merely illustrative.

As Ukrainian refugees started arriving to countries like Poland, Slovakia or Hungary, they were met with several reporters, waiting to talk to them and to know their stories.

On NBC News, reporter Kelly Cobiella said that “these are not refugees from Syria”, but “Christian”, “white” people. But what about black people in Ukraine? For Lucy Watson, a reporter for Britain’s ITV, “the unthinkable has happened – this is not a developing, third-world nation- this is Europe!”.

Here’s some data on Human Development Index (HDI): HDI is defined by the United Nations as a summary measure of average achievement in key dimensions of human development, such as health, knowledge, and the standard of living, in terms of wealth, of populations. Syria’s HDI rate was 0,550 (in 1) in the 1990s, having grown until 2011, where they peaked at 0,678 – right before civil war started. They are now a completely destructed territory, and #151 in the world rate. Ukraine’s HDI rate has been around 0,7 since the 1990s, almost reaching 0,8 – and now they probably won’t, since Ukrainian cities are being torn apart. Ukraine is #74. The #1 country in the world, Norway, rates 0,95, whilst the least developed one, at #189, Niger, rates 0,39. Russia rates #52, Serbia rates #64, Albania #68, Iran rates #70, China #85

We’ve looked at the numbers, now let’s look at the words. How would you define ‘thirdworld country’? Many sources point to political matters, whilst others report to their economies. We could even consider Russia and China to be third-world countries, if we focus on civil liberties and political rights being repressed. However, a ‘third world nation’ isn’t even defined this way. Historically, it’s meant to define countries that didn’t align with either the Western nor the Eastern blocs during Cold War. So, if you wanna say Ukraine is not a third-world country, by its original definition you are right, as it wasn’t even a country during the majority of this world conflict; but you can’t say Europe has been all in for the Western bloc; instead, many European states could be portrayed as neutral.

Enough of data, let’s backtrack to where we were: for Ukrainian politician David Sakvarelidze, this was “very emotional”, as he saw “European people with blue eyes and blonde hair being killed, children being killed every day with Putin’s missiles and his helicopters and rockets”. But what about Palestinian children being killed by western supported military attacks, everyday, for as long as we can remember?

Jean-Louis Bourlanges, from the French National Assembly’s foreign affairs committee, has said that Ukranian refugees will be “an immigration of great quality, intellectuals, one that we will be able to take advantage of”. Does this mean we should ignore the work of thousands of immigrants that have moved to France to work an guarantee the conditions that politicians like Bourlanges have on a daily basis? People who constructed the places he goes to, people who greet him with the best manners in restaurants and public places, people who contributed to science in European universities. And even people who, born in France from immigrant parents, voted for that same Assembly.

Kiril Petkov, Prime Minister of Bulgaria, called Ukrainian refugees apart from other migrants by saying they are “educated”. But the following quote, dear reader, is where we draw the line: “This is not the refugee wave we have been used to, people we were not sure about their identity, people with unclear pasts, who could have been even terrorists”. Let’s not forget that one of the reasons that Putin is using to motivate this conflict is the existence of neo-Nazi and terrorist militias in Ukraine; and even though Putin is an actual terrorist, at the moment, and nothing could justify Russia’s violence, the existence of Nazi aligned groups in Ukrainian politics is not entirely a lie.

That doesn’t mean that Ukrainian people have to be treated like terrorists. We all know that, right? So why are we treating all refugees from the Middle East like they are all potential threats to security in our continent?

This is a direct consequence of misinformation, which is more than ever an act of war. When information becomes too much, two things happen: (1) we get overwhelmed and (2) we stop making the effort to look into what’s actually true.

It’s been a month since Ukraine was invaded, and whilst all Europe knows too well what the Ukranian people are going through, in Russia the case is very different. With a strong policy (that has been applied for decades now) of repression towards anyone who disagrees with Putin’s gang, anyone who is against this conflict is immediately arrested – and, as Russians know (or must know, because that’s what the media have been forced to tell them), there is no conflict in Ukraine right now. It’s a simple matter of diplomacy and soldiers are only dying because… well, I’m sorry, we have to interrupt this broadcast because we are having technical issues right now.

The issues being, well, propaganda, which is the reason why the EU put out a ruling that forbids all EU states from broadcasting state channels Sputnik and RT. Let’s not forget that propaganda exists on both sides, though – Ukrainians have shared videos of detained Russian soldiers on social media, which have circulated until someone pointed out that it could constitute a violation of human rights to expose them like that.

A Polish Wall: Safety or Intolerance?

Misinformation and propaganda are the first and easiest act of a ‘digital war’, a concept that no one knows how to properly define. For the past few weeks, we’ve heard generals and politicians saying that nowadays ‘digital war is what determines physical war’, and not the opposite. Another act of this digital war could be the many attempts to stop communication from entering or leaving the opposite states, which in this conflict have been unsucceeded.

Ukrainian Vice Prime Minister Mykhailo Fedorov has shown that he knows that the digital world has a big impact this time. In the end of February, he reached out to Elon Musk with a tweet that said “While your rockets successfully land from space — Russian rockets attack Ukrainian civil people! We ask you to provide Ukraine with Starlink stations and to address sane Russians to stand”, which he responded to, sending tech material to support Ukraine’s connection with the world. Not only that, but Fedorov was also the first to publicly ask people to join a totally digital army to fight on the “cyber front”. This front needs protection from attacks such as highly sophisticated hacking on state digital systems.

If we’re in a position where politicians reach out to social media to ask for something as big and unexpected as the creation of a digital army to fight another state’s attacks on the sovereignty of their state, we are in a position to admit that media (in a broad sense) has a big impact on foreign policy.

The Arab and Middle East Journalist Association issued a statement in which they said that the way reporters have been commenting on refugees from Ukraine “reflects the pervasive mentality in Western journalism of normalizing tragedy in parts of the world such as the Middle East, Africa, South Asia, and Latin America”.

On this topic, we’ve seen western journalists trying to justify the wave of solidarity with Ukrainian refugees with geographic proximity. A Portuguese journalist mentioned on Twitter that History, a common past, sacred lands that we all share as Europeans, is what made her cry at the sight of Notre Dame, a building, burning, for example (at the lack of mention, we assume she didn’t cry with Eastern tragedy). If that’s the case, if geography is the answer, wouldn’t Southern Europe be in more solidarity towards African refugees rather than Eastern people? Especially when not long ago we were rejecting Eastern European populations, comparing them to Asian people rather than ourselves  – suddenly, politically, it makes sense for the Western countries to pull the ethnicity card.

To many people, this isn’t necessarily racist. Most of them disagree that we have an eurocentric view on this scenario, but they are white, European commentators.

Rajini Vaidyanathan, a BBC correspondent in South Asia, says “this is one of the many reasons why diversity enriches foreign reporting”, adding that the “assertion that somehow European refugees are more civilised is offensive and borne from ignorance”.

When our public figures, being our politicians or the ones responsible to inform, aren’t equipped to fairly report these situations, and refuse to hear voices from people who are, we all lose. We become less tolerant, and we shouldn’t even be tolerant in the first place – because, as Portuguese poet Ana Luísa Amaral once said, being tolerant means we think we are above the other. We must listen and empathize instead.

Check out this live debate hosted by The New Humanitarian about “Ukraine & Beyond: What media coverage of crises tells us about those we forget”: