Around the World:
What's Going On in Yemen? 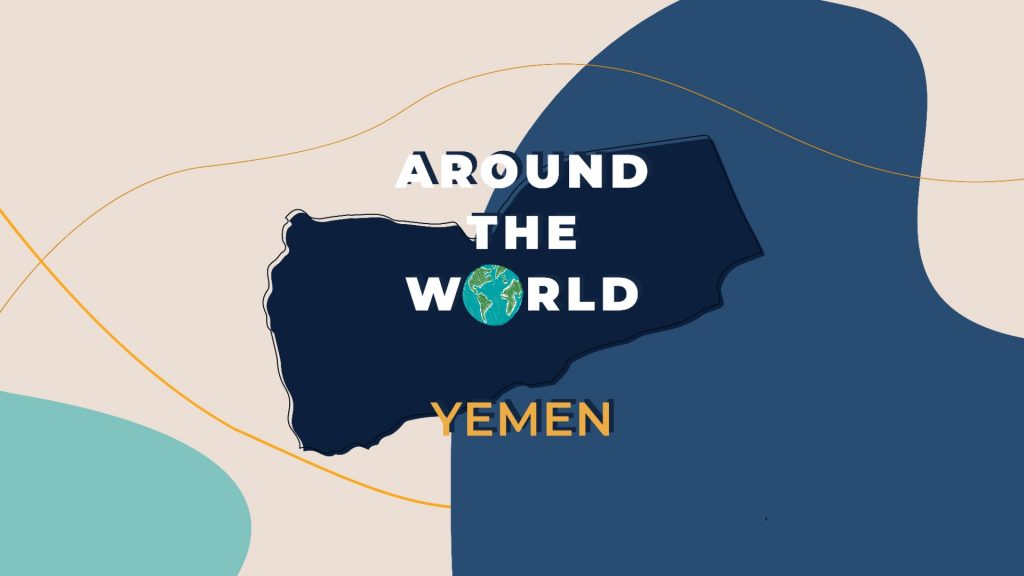 More than seven years of intense fighting have brought Yemen to a humanitarian catastrophe. The civil war with support from external states has resulted in countless deaths, suffering, hunger, displacement and there is no end in sight. What’s happening in Yemen?

Yemen is a country in Western Asia, on the southern end of the Arabian Peninsula, and is the poorest nation in the Middle East and North Africa. Its population of around 30 million people has been facing serious hardship, with the United Nations (UN) estimating that, in 2021, 24.3 million people were “at risk” of hunger and disease while 14.4 million were in acute need of assistance.

The country is being ravaged by a civil war that opposes the government with its allies and a rebel armed group. For seven years, the conflict has been worsening Yemenis’ situation and more are being pushed into extreme poverty every day.

According to UNICEF, 47 children were killed or maimed in the first two months of this year. The statement by Philippe Duamelle, the UNICEF Representative in Yemen, also informs that since the escalation of the conflict, in 2015, more than 10 200 children have reportedly been killed or injured, but the “actual number is likely much higher”.

What spurred the civil war and why is it still active?

The Yemeni Civil War has been going on since 2014 and opposes the Houthi rebel movement and Yemen’s official government supported by a Saudi-led coalition. It is a complex civil war featuring many interested parties with different motivations.

The Houthis (formally Ansar Allah) are a group of the Zaidi Shia Muslim minority that opposes the Sunni-dominated governments since the 1960s, when a revolution in North Yemen put an end to more than a thousand years of Zaidi rule. Ever since, the Houthis have been trying to regain power.

In the wake of the Arab Spring, authoritarian president Ali Abdullah Saleh was forced to resign and former vice-president Abdrabbuh Mansour Hadi occupied the seat in 2012. However, the revolution’s expectations weren’t fulfilled and many Yemenis, including Sunnis, started backing the Houthis.

In 2014, the movement seized control of the northern Saada province, their homeland, and started moving south towards the capital, Sanaa, which they gradually took over in 2015.

Switching sides, the military forces loyal to Ex-President Saleh (who the Houthis had rebelled against multiple times while in office) banded together with the Houthi movement in order to retrieve power from Hadi, who was forced to flee the country on March 2015, after the Houthis got to Aden, a port city in the South that is the government’s operational base.

Neighboring countries intervened. A coalition of nine countries led by Saudi Arabia (Sunni-majority nations) launched a military operation with air strikes to reinstate Hadi’s government, since the Houthis are said to be backed militarily by rival Iran (Shia-majority), with which Saudi Arabia has been in a sort of cold war for more than 40 years.

This means that restoring the official government isn’t the ulterior purpose of the Saudi-led coalition in fighting the Houthis, but actually counteracting Iran’s influence in the Middle East region.

The coalition has since been at war with the Houthis. They were successful in recovering the South of the country (including port city Aden), but not yet Sanaa, Yemen’s capital.

In 2017, Ali Abdullah Saleh, former president that joined the Houthis in a turn of events, was caught switching sides once again and was assassinated by the rebel movement while fleeing. His loyalists are now allies of the coalition.

Since then, both parties have been fighting over Yemeni territory, with aggravating conflicts in the cities of Hudaydah and Marib. Hudaydah is a very important port city for Yemen, since it connects the country to the Red Sea, while Marib is the last stronghold of the government in the north and the capital of an oil-rich province that would be able to make a Houthi-led state in Yemen economically viable.

The Houthis are also attacking Saudi Arabia directly, many times hitting civilian infrastructure. Just a couple of weeks ago, the Houthis claimed a drone attack on a refinery in Saudi’s capital, Riyadh.

“A civil war within a civil war”

There’s also a third party that comes into play, the separatist Southern Transitional Council (STC), that demands an independent South Yemen. In 2018, they were an important part in driving out Hadi loyalists from Aden and other southern provinces. In 2020, the separatists and the government of President Abdrabbuh Mansour Hadi signed a peace deal named the Riyadh Agreement, which promised the STC a role in government in return for their integration in the Saudi-led side of the fighting.

Marib: once a refuge, now at conflict

As we’ve told you, the war is now intensifying in Yemen’s city Marib, where thousands of people are being forced to flee the violence each week. As The New Humanitarian reports, Marib has been a “bastion” of the Saudi-led coalition and the city’s population escalated from 55 000 in 2014 to an estimated 630 000 people in 2020 since civilians sought refuge there during the war.

The numbers are even bigger now, since UNICEF accounts for more than 60 000 people displaced within or to Marib governorate just between September 2021 and the end of January.

However, Marib is no longer safe and the population is being forced to escape once again.

Most of the people who fled to Marib are staying in displacement camps. These camps are between the city and the front line of fighting.

One Yemeni photographer, Nabil Alawzari, tells The New Humanitarian in interview that te city is safe compared to the camps, adding:

“One time, I took my oldest son with me to the camp. He asked, “How can this be? They don’t have anything: only the dust, only the sun, only the cold. At night, it’s cold; all day, it’s just sun and dust.” I told him: “It’s Yemen.”

“A generation of children is growing up with no thought of other than war.”

Unfortunately, the conflict doesn’t seem to have an end in sight. UN most recent reports describe an escalating of violence in the past months and a lack of funding to continue humanitarian operations.

An enlightening statement (issued on the 15th of February) by the Under-Secretary-General for Humanitarian Affairs and Emergency Relief Coordinator, Martin Griffiths, discloses that the “crisis shows no sign of abating”, for they have witnessed “a sharp and dangerous escalation in conflict” that has now “dragged on” for seven years.

“More than 650 civilian casualties were reported in January. It is, by far, the highest toll in at least three years”, can be read. “The war is finding people in their homes, schools, mosques, hospitals and other places where civilians should be protected”.

The coordinator also sheds light on the security challenges they are facing. Five UN staff were abducted in the first weeks of February adding to the two UN workers who were arrested in Saana last November and remain in detention.

In 2021, nearly 200 organizations worked together through the UN response plan to assist more than 11 million people every month. Howbeit, according to the text, they are missing funding and won’t probably be able to assist in the same way in the current year:

“Aid agencies are quickly running out of money, forcing them to slash life-saving programmes. By the end of January, nearly two thirds of major UN aid programmes had already scaled back or closed altogether”, Griffiths noted.

Weeks before, in a joint statement by the UN Special Envoy for Yemen, Hans Grundberg, and the UN Resident and Humanitarian Coordinator for Yemen, David Gressly, UN declares that it’s “alarmed by the escalating spiral of violence in Yemen that continues to harm civilians and its spilling over its borders”.

At issue are the airstrikes launched a few days earlier by the Saudi-led Coalition against various civilian facilities, including a detention center in Saada, with at least 60 deaths and over 100 injured among the inmates, which were also condemned by the UN Secretary-General, António Guterres.